I bought a house this week. 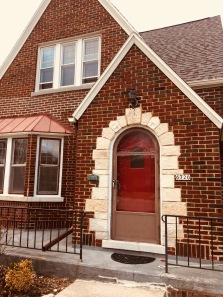 It’s not the first time I’ve owned a house but it is the first house I have owned alone.  I don/t think I was ready to own a house alone … until now.

Now the reality of that hit me the morning after.  It snowed over night and while I was sitting, leisurely writing in my journal, all of a sudden my brain exploded with this thought –

Oh Shit, I own a driveway!

Luckily, the sun took care of the snow this time.

In the past, I bought a house with someone else.  I didn’t feel the weight of all the details like I feel them now.  And, it occurred to me, as I was going through each step towards this purchase, that I feel like I kind of know what I’m doing.  All the times before, maybe I was being prepared to do it this time alone.

This Calls for a Celebration

Along the way, people  really did want to help.  Still, I felt as though this was a “Do I, don’t I?” moment that belonged to me alone.  When I made the decision, it became simple…just take one step at a time. And, just like that, one step after another, there I was driving away from the closing with keys in my hand. And there was that feeling again:  I realized that I had just completed this process by myself – no realtor, no one sitting next to me while I signed that two inches worth of paperwork. How many times did I sign my name?  I lost count. By the end of it all, my hand was shaking. But it was my name, just my name.

Then I was ready to share the moment with someone.  So I drove to my new home.  I parked the car in my driveway and then I walked next door…to my daughter’s house!  She was ready to celebrate with me.

Champagne for me.  Orange juice for the grand baby.

We had a moment.

A woman to woman moment.

We can do anything we put our mind to, little girl.

But Now It’s Time To Get To Work

Ok, so while I got a little help with that snowfall, there are more projects that I have to tackle before I actually move in.  I have a window of time and it was my daughters who both said that I’d regret it if I didn’t get the floors refinished prior to moving in. They’re right.  The floors are beautiful hardwood floors, downstairs and upstairs but the upstairs had been covered with carpet.  I’ve never pulled up carpet before but I did find someone who can refinish before my move in date as long as I get that carpet up. So, armed with a new sharp razor, I set to work. 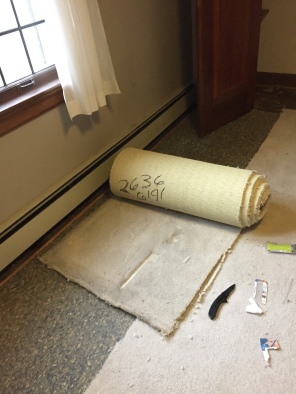 I mean, how hard can it be to cut carpet, roll it up and sweep the floors afterward?

My first clue should have been the guy at the hardware store who said that pulling up carpet was one of the worst jobs he’s ever had to do.

Well, let’s just say that I earned my first blister from this job but, after two days, I am nearly done with my first homeowner job.

Here’s what I learned from this task:

So far, I have removed two rooms of carpet and feel like a bit of an expert as I round the corner on room number three. 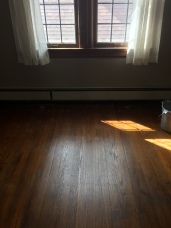 Luckily, it won’t be long and I will be turning the baton over to experts to sand the floors and paint the walls. I’m sore and tired and it’s only been two days.  This is going to be some adventure.